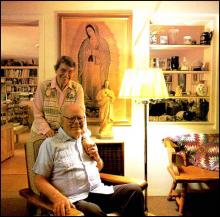 from the manuscript in the Ronstadt Family archives
at Special Collections, The University of Arizona Library

Borderman Fred Ronstadt wrote his memoirs on the backs of old F. Ronstadt Co. letterhead, during several years of summer vacations. A portion of the text, relating to his early business years and wagon manufacture, was first published in 1975 as a Tucson Corral of Westerners Smoke Signal issue, entitled Wagon Making in Southern Arizona. When Borderman was later prepared for publication, the editors decided to exclude the previously published section on wagon making, and deleted or reordered some passages in order to improve the readability of the text.

The publication of the electronic text for Borderman has been a labor of love, requiring the work of many hands:

The foreword, introduction, epilogue, bibliography, and acknowledgements are reformatted from the published book.

The electronic text of Borderman is the complete, unedited version of Fred Ronstadt's manuscript as he first wrote it.

Scholars may now experience this remarkable document in its original form. We are particularly grateful to Terry Carter for preserving the transcription and making it available to the University Library.

This electronic text is dedicated to Edward and Mary Catherine Ronstadt, with gratitude for their hospitality and generosity. Edward Ronstadt died on November 14, 2001.

The original version of Borderman was created by Robert Hershoff, Applications Systems Analyst, Sr., in the UA Deparment of Biochemistry & Molecular Biophysics. Robert, who at the time worked in the University Library, is an accomplished bookman, student of Lawrence Clark Powell, and scholar of Southwestern literature. The current version of Borderman was created in April 2005 as part of the overall redesign of the Through Our Parents' Eyes websites.