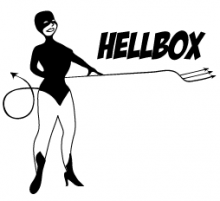 Jim Cooper’s The Bar Is Open, published posthumously after his death in 1992, chronicles the Tucson Press Club (TPC), its annual Gridiron Show and the show’s accompanying program, The Hellbox. The Tucson Press Club was active for roughly four decades – from the mid-1940s to the early 1990s. It began before television news, the Internet and 24 hour cable news networks. Over the years it included hundreds of members. This website is one attempt to preserve information about TPC, its Gridiron Show and a dozen The Hellbox annuals, artifacts of a previous era.

In March 2008, Tyler St. Mark discovered a 1999 student project about the Tucson Press Club on Through Our Parents’ Eyes and emailed us. He wrote that his parents, Marklan and Beverly Manning, were active TPC members during the 1950's and early 1960's and appeared in some of the annual Gridiron Shows. Mr. St. Mark remembered how he grew up knowing many of the club's members. “Stories of the Press Club and the Gridiron Shows were part of our lives during the 60's and 70's.”

Mr. St. Mark shipped us a dozen The Hellbox programs characterizing them as “remarkable time capsules of the legendary Gridiron Shows.” It presented us with an excellent opportunity to bring these unique artifacts and, to some extent, the Tucson Press Club to the community.

In addition, Mr. St. Mark purchased a copy of Jim Cooper’s The Bar Is Open for us. Clearly, we are all grateful for his fond memories of Tucson and generosity.

Mr. St. Mark tells us that while Gridiron Shows and The Hellbox may have "pushed the satire envelope at times, they were never lacking in common decency." There was a high degree of intellectual substance behind the Shows' satirical material.

For some visitors, The Hellbox issues may appear "sexist." In reality the organization and the shows were greatly sustained and supported by the talented women involved. Some of the most creative contributions were made by TPC women, both members and volunteers. Marge Hilts, for example, directed the Gridiron Show for 28 years.

TPC was founded in 1944 when the Arizona Daily Star’s managing editor organized a press club. Cooper explains that back in the 1940s members of the press formed clubs because “Their skulls throbbed from their associations with non-news types. They wanted to be with their own kind during non-working hours.” (p. 3) Club members met in various locations to play poker and drink. In 1954 the first Gridiron review, Hot Copy, featured songs and skits that satirized the local press, law enforcement, the Governor, and “made hilarious the antics of Tucson’s alleged Mafia.” (p. 28) The first Gridiron Show not only made outsiders aware of the Tucson Press Club’s existence but it also raised enough money for the Club to pay off its debts. With the incentive of raising revenue in support of the TPC and a UA scholarship fund, Gridiron Shows became an annual event. In 1956 the Show’s program, not yet a Hellbox, included “24 ad-packed pages.” The 1957 Gridiron Show program introduced the first Hellbox with Art Director Dick Calkins’ drawings. It “featured pin-up girls, fiction, and limericks between the many ads.” (p. 39)

"The Hellbox girl stokes the fire under a very glum roastee on Dick Calkins' 1960 red and black program cover. (p. 59)

The 1960 Gridiron Show took its title and theme, "That Ole Black Finger" from the perception that the Mafia was thriving in Tucson. Skits included "We Are the Mafia" song to the tune of "Hooray for Hollywood," and "That Old Back Finger," to the tune of "That Old Black Magic." Jim Cooper reports that another skit was "Women's Prison" based on the State’s plans to build a women’s prison in Florence. The 1960 show ended with the song that closed all future Gridiron Shows.

"The cover for the 10th anniversary Gridiron Show had caricatures of celebrities cartoonist Dick Calkins hoped would be in attendance. Adolf Hitler was among the no-shows." (p. 95)

The theme for the 1963 Show was "The Half-Vast Wasteland" Above the masthead on page three is a The Hellbox explained:

You work for hours, days, weeks on a story … pour your heart and soul into it... it’s alive, reall... the printer sets it in type... It’s “proofed” … “dummied” into today’s paper... cast for the press... and then, in order to be used another day, the type is dumped into the … the hellbox

"Dick Calkins drew a devil instead of a devilette for the 1964 cover, but he still managed to include some feminine pulchritude."

The 1965 Gridiron Show was held at the Saddle and Sirloin and included parodies of Ladybird Johnson and daughter Linda, and the Drachman family who Jim Cooper wrote were "sporting about the whole thing." While most songs were directed at local Tucsonans, the lyrics to one song about Selma, Alabama, drew attention to the violence directed at the city’s black residents.

"’Princess Margaret... Meets the Effluent Society’ was the Title, so Calkins’ cover for the 1966 show featured a royal throne room." (p. 117)

British Princess Margaret had made a 1965 tour of the United States without her intended, Anthony Armstrong-Jones, later know as Lord Snowden. Tucson was included in her itinerary.

While in Tucson, she was the honored house guest of Southern Arizona Bank & Trust’s president, Lewis Douglas, formerly an ambassador to the Court of St. James.

Sir Lew had a residence on Rillito at Swan Road. Floods had overflowed the river channel, and sewer pipes were broken in the area, causing bad odors and a general mess.

One song, “Up Rillito Creek Without a Paddle,” sung to “Up the Lazy River” included these lyrics:

Up Rillito River, where the sewage flows
I’ll have to warn your Highness you should hold your nose
I’m not sure that I can stand this awful stench.
Up Rillito River where the pipes are broke
The water’s nice and clear here but it’s killing folk.

“Dick Calkins’ cartoon picketers fit the Hellbox’s theme ‘Protest 1967,’ but the show title changed before opening And his backdrop was ‘Detour to the Olympics.’”

The 1967 Gridiron Show was the first directed by Marge Hilts, who directed 28 Shows in all. In her 1999 interview with a UA student, Ms. Hilts explained that she “turned the acts into song parodies rather than just write-ups because it’s a lot harder to mess up singing a song than a write-up. She was always aware of how people perceived her show because she wanted people to be able to enjoy themselves and not be too embarrassed watching from the audience. ‘We managed to maintain some dignity in spite of being raunchy as hell.’”

The 1967 Gridiron Show was held in the Skyroom on the ninth-floor penthouse of the Arizona Land and Title Building on Stone Avenue and Alameda Street, the TPC’s new home. Jim Cooper writes that this Show was “a commentary on the city’s annexation plans, newspapers, advertising, television, hippies, politics on all levels, and other items of consequence and no consequence.” (p. 140)

Jim Cooper tells us that the 1971 Gridiron Show included what was considered the funniest skit in Show history. Closing the 1971 Show was “A Wedding of Sorts” that was “a devastating takeoff on the marriage of Tricia Nixon, the President’s daughter, to Ed Cox.” (p. 163)

“Calkins’ printer’s devil and clip art of President Nixon were combined for the 1972 Hellbox cover.” (p. 173)

The 1972 Gridiron Show was held at Tucson’s new Community Center and entitled, “New Pha$e$ of 1972” The Hellbox reflected the times by bringing many references to President Nixon’s problems. It also mimicked Playboy magazine by including a fold-out centerfold of UA President Jack Sheaffer lying on a blanket with a cigar superimposed by his face. Positioned with the centerfold was Hellboy’s Party Jokes, humor penned by TPC members.

“This black and blue cartoon by Calkins was printed on silver paper for the 25th anniversary program cover.” (p. 221)

Jumping to 1978, we read that the Tucson Press Club existed only because of the revenue generated by its Gridiron Show and The Hellbox ads. Cooper reports that the Tucson Press Club was struggling - members bickered, a bartender quit, an attorney had not been paid, someone wanted to be paid for work on The Hellbox. He notes that the Club still managed to hold forums of interest. A State Senator moderated a forum on rape, the new copyright law was explained by Sid Diamond, Mo Udall gave a congressional update, movie stars and sports figured attended meetings and auctions. (p. 223) The 1978 Gridiron Show was again held at the Community Center and described in an Arizona Daily Star review as a “polished offensive act.” As in past Shows, songs and skits parodied the local and national scene.

The 1991 Gridiron Show was TPC’s last. Jim Cooper noted in his last chapter that press clubs around the country, like the TPC, had outlived their time. (p. 299) Later in 1991, Headline Productions, Inc. "was founded as a non-profit Arizona corporation by the all-volunteer, unpaid members of the cast and crew of the Gridiron Show to insure the continuation of this hallowed and hilarious tradition." It did so with the "permission and blessing of the TPC Board of Directors to use the Tucson Press Club name in ‘perpetuating this perfidious performance.’" The list of Gridiron Productions at the end of The Bar Is Open includes Headline Productions, Inc.’s 1992, 1993, 1994, and 1995 productions.