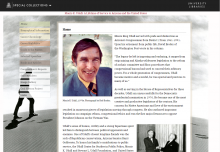 Morris K. Udall: A Lifetime of Service to Arizona and the United States

Morris K. Udall: A Lifetime of Service to Arizona and the United States

Morris King Udall served with pride and distinction as Arizona's Congressman from District 2 from 1961-1991. As well as serving in the House of Representatives for three decades, Udall ran unsuccessfully for the Democratic presidential nomination in 1976. He became one of the most creative and productive legislators of the century. His concern for Native Americans and love of the environment resulted in numerous pieces of legislation moving through congress. He also authored important legislation on campaign reform, congressional ethics and was the first major Democrat to oppose President Johnson on the Vietnam War. This website presents papers and photographs of the Morris K. Udall Papers held by the University of Arizona Library Special Collections Department.

URL
https://speccoll.library.arizona.edu/online-exhibits/exhibits/show/morris-k-uda…
Where this site should show up under
People and Places
Subject Tag
People & Places