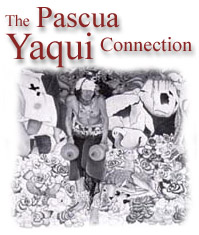 The Pascua Yaqui Connection is a cooperative project funded by a U. S. Department of Commerce TOP grant award. Chris Lamar, Director of Telecommunications and Production Services at Pima Community College, is the Program Manager.

A number of initiatives are included in the Pascua Yaqui Connection. For example, a functional Learning Laboratory opened in September 1999 at New Pascua under the direction of the Tribe's Education Department. The laboratory is well equipped with personal computers purchased through the grant. Network and Internet connectivity for the lab was installed under the direction of the University of Arizona's Telecommunications Department.

The Pascua Yaqui Connection Web site is the product of the efforts of several persons.

In 1999, Rosa Anchondo and Amalia Reyes, of the Pascua Yaqui Tribe of Arizona, reviewed materials for their appropriateness for the Web site, and presented resources to the Tribe's culture committee for approval. Felipe Molina was extremely helpful in selecting images for the Web site from the Old Pascua photograph collection.

The images used in this revised version of the Web site were designed by Michael Martelle, a graphic artist working in the University of Arizona's Learning Technologies Center. Michael also designed the overall HTML page layout featuring the attractive mouseover buttoms. Logo images used atop the different sections were created by Gary Mackender of the Multimedia Lab.

The Web site's mark-up and maintenance is by Stuart Glogoff, Learning Technologies Center, the University of Arizona. Please e-mail your questions and comments regarding the Web site to Stuart.

Al Leibman, formerly of Pima Community College, interviewed Dolores Flores and set up the streaming video of her interview.

The Web site resides on a server in the U of A's Learning Technologies Center. It is backed-up each evening.

Part of which site
The Pasqua Yaqui Connection