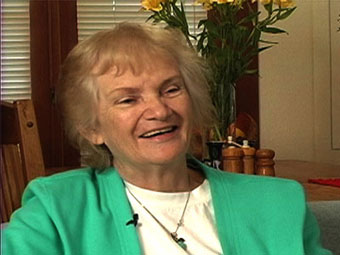 Alice Hackett Pesuti was in the eighth grade at Sopori School in 1942. Her younger sister Lee Bell Taylor was of kindergarten age. Her brothers Eddie and Jimmy also attended Sopori while their mother, Irene Hackett Bell, drove the school "bus."

Alice Hackett Pesuti was an eighth grader at Sopori School when she wrote "Alice, Who Gets Good Grades, Plays the Piano" in the May 20, 1942, Little Cowpuncher. Her illustrations may also be found, such as one from the March/April issue. Below is an image of her article in the February 20, 1942, Special Rodeo Edition published by the Arizona Daily Star. 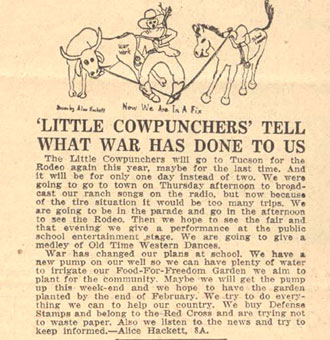 Alice Hackett Pesuti was interviewed on February 17, 2003, at Joan Sandin's home in Tucson. We were fortunate that Alice was visiting her sister Lee from her home in California and was interested in sharing her memories of being a Little Cowpuncher. [05:18 video]; addressing envelopes to people around the country receiving copies of the newsletter, the Sopori School and memories of Mrs. Bourne [08:03 video]; being an eighth grader during World War II [05:19 video]; going to school in Tucson after attending the ranch school in Sopori and her life after school [05:17 video]