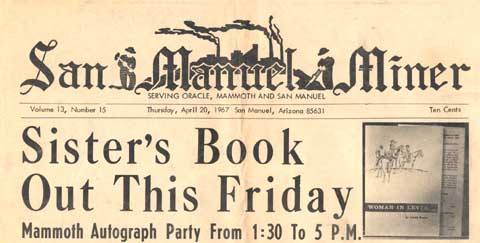 This coming Friday afternoon in Mammoth, the woman who will be autographing books at the Lions Club Building, may not appear exactly as she does in the picture accompaning this article. That is to say, she will likely not be signing her name in her new book while sitting on her horse.

However, follow Eulalia "Sister Ryland" Bourne back hem after the 1:30 to 5 p.m. autographing party is over, and before the evening is through she will in all probability be seen just as photographed here. Sister Ryland didn't just sit down and write a book. First she lived the story and then recorded her memories.

Today, just as she has done over the many years past, Sister is still running a ranch; still driving her pick-up truck to town every other day or so over that steep, winding mountain road; still working from dawn to dusk; and still managing to look as young as she did 20 years ago.

The former school teacher, who traded the classroom for the prairie, has seen many changes over the years. She has

Sister Ryland, the "Woman In Levi's" of the book by the same name, has been at home on the range many years now. Her new book, which is coming out this Friday at an autographing party in Mammoth, deals with cattle and kids. It offers the old timers many memories, and to the younger generation it gives a real-life history of the ways of the wild west.
lived what some might call a hard life. Others might call it a satisfying life. And others still would certainly term it an exciting life.

To Sister, as she looks back upon her past years, her life has probably been all of these and more. It still is.

"Woman In Levi's" is a book about her life. It is not simply a book about he past, however, even though it recalls many happy and sad times in the past. It is a book about the future too, for it contains many thoughts about the outlook of life which will apply just as well 100 years from now as they do today.

Sister presents her own philosophy concerning life. She winds this philosophy into the many incidents which took place throughout her lifetime.

So "Woman In Levi's" is more than an ordinary book. It is many things woven together under one cover. This Friday you are invited to attend the Autographing Party in Mammoth. If you miss the party, you are going to miss a chapter in the book. For Sister's book, even though it has now been published by the University of Arizona Press, is still being written.

It is a book which will really never end, for Sister is the type of person who will continue to be remembered and talked about long after her writing days are over. And new chapters to her book will continue to come forth every time someone begins talking about the old days in the San Pedro Valley.

The other day, following one of the stories which appeared in this newspaper concerning the upcoming book party this Friday, Sister wrote the editor a note which ended in part as follows:
"I've been trying to get to your office. And I'm going to try harder…Right now I'm shamefully busy. Nice people just don't get as busy as I am."

Sure they do, Sister! It is just that most nice people might not work as hard as you do. Of course, then too, maybe most of the nice people are old people, and only the young have the energy to be as busy as you. It is nice for everyone here to know a young person as nice as you.

Perhaps you are wondering something about the title: "Woman In Levi's". Of course it is obvious that a working ranch woman usually wears men's clothing to round-up cattle. And clothing made by Levi Strauss has been famous for years as the brand tough enough to stand up under the punishment demanded of it. It has also been famous for its style.

This has been an unbeatable combination. One that many manufacturers envy. In fact the product has been so good, people connect the name "Levi" as a type of clothing, not as a brad name. This is the greatest compliment a manufacturer can receive.

When Sister named her book, she well knew that Levi's was the brand name of a product. For years she had worn clothing with the name "Levi's" on it. So it was only proper when the title of the book out "Woman In Levi's" the apostrophe was placed in the brand name, for Sister was talking about Levi's clothing.

As Sister stated recently, "Levi's is not in the dictionary. People who wear Mr. Strauss's products do not write dictionaries. However, Levi's is on every pair of blue denims and the other modern colors too. In fact it is on each pair twice."

And if anyone should know, the "Woman In Levi's" should!